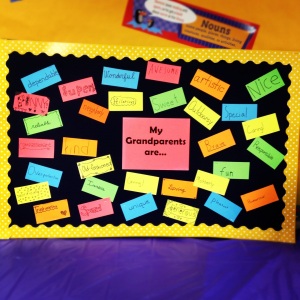 Today was Grandparents’ Day. It was my first one. I didn’t know this was a thing. Still learning all this elementary stuff, I guess. It was my first recital-type program, too. Risers and everything. I had no idea what to expect of today… other than exhaustion at the end. I was right about that.

Everything went well. My kids were nutty as heck, but other than that, it was good. After the program, grandparents came to the classrooms and looked around. Our PTF set out muffins and fruit, so my students who were without grandparents stuffed their faces and made messes while I met the grandparents who were able to make it today. The best part was that, somehow, I ended up meeting people from all over the world.

When I met the grandfather from England, I stood up very straight and tried to use my very best grammar. I think I told him I was “delighted” to meet him and even snuck in the fact that I studied abroad at Oxford. He was not impressed. Drat. Must’ve been a Cambridge man…

The grandmother from Puerto Rico told me that I had the most impressive classroom she’s ever seen. She’s right, of course… my classroom kinda rocks. But my favorite foreign encounter of the day was the French grandmother who informed me that I was far too young to be a teacher. I responded politely, and thinking that she couldn’t tell my age, I told her that I would be 29 in a couple of weeks. The look on her face told me that I had quite proved her point. How old are teachers in France?

I met plenty of American grandparents as well. Some were obviously very close to their grandchildren and others seemed like strangers to one another. This got me thinking.

I’m blessed to have six grandparents still living and to have relationships with all of them 🙂 (In fact, one set is in town and I’ll get to see them tonight– woohoo!) Brian also has two amazing grandmothers whom I love dearly. But, the grandparent I am closest to in all the world is my Gran.

My Gran is one of my dearest friends. She is one of the toughest ladies I know. I can talk to her about anything– and I better, because she’ll be upset if she has to hear it from someone else!

Some of my first memories are with my Gran on the weekends. I think about her every time I’m in a department store– I remember that she could shop all day with stopping and I would hide under the racks of clothing just to get a chance to sit down. Then, we would sit in the food court with a soda and watch the people. I love watching the people.

She taught me to iron on Poppy’s shirts while we watched a Dr Quinn: Medicine Woman marathon in her bedroom. I still love to iron. And we used to go to Luby’s to get the Luann platter, and Gran loves to go to the movies.

When I was a freshman in college, we ran up the phone bill so high we get to get on the same cell phone plan. I lay in at least three hospital beds with my Gran and sat by her side on several more occassions– she pulls through every time. She survived breast cancer and now lives with cancer she fights every day. When she got her pace-maker, I told her it was because her heart was working so hard loving all of us that it just needed some extra help.

In South Africa, we needed an espresso machine for the coffee house we started– Gran sent the money. Gran helped buy my car, supported me in missions, and sent me care packages in college. She has always done everything she could to take care of me and to love me well. She loves me really well.

She tells the best stories. I love to hear them, over and over. She gives the best hugs. She has the second best laugh (Poppy has the very best). And she never gets annoyed when we make fun of the way she says “wash.”

I met a lot of grandparents today. They were neat people, but none can compare to mine. So today, I celebrate my Gran– the “grandest” of grandparents.