Today was our first day back to work and we’ve had a lot to do today, I’m going to post a few pictures from the honeymoon.

Hanging out on the beach…

This is the first time I checked the box. 🙂

The view from our balcony

This is where we were writing our blog posts from. I’d be a lot more prolific if this was my permanent spot.

A great spot we had at the end of the beach 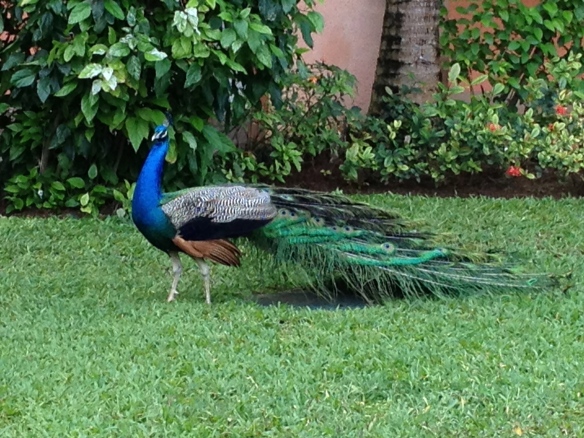 There were some amazing peacocks roaming the ground. It was really cool to see them every day.

We got home late last night– it was a 19 hour travel day. Brian carried his wife over the threshold (in a white sundress– I’m all about the details!), even though we were both practically zombies.

Our first day back in Austin as man and wife was spent in true “old married people” fashion: we did tons of laundry, planned meals for the week and grocery shopped, and also laid on the couch and watched some shows on the DVR. I once mocked such behaviors, insisting that weekends were for going out and doing all sorts of fun and exciting things. And while the Lindsey of that time may have had some valid points, the Lindsey of today had a pretty stellar day. Any day spent with Brian is wonderful (and feel free to throw that back at me after you read my first “I’m so pissed at my husband post”).

We haven’t been apart since we said “I do” and all of that changes tomorrow. I mean, sure, we’ve had bathroom breaks and Brian went sailing sans first mate the day after the oh-so-fun windless sailing trip, but we’ve essentially been together for eight days straight. It’s been incredible– truly. I’m so in love with this man (he’s sitting next to me and I just gave him the goofiest grin) and spending all of this time with him has just made me love him even more.

My stance right now is that I really liked the “Jamaica reality” of the last seven days (and yes, I do understand that there are oh-so-many things wrong with that comment, especially the fact that the version of Jamaica that was fed to me was in no way a reality– but I liked it, so hush). I loved the honeymoon version of us where we were so ridiculously smitten that EVERYONE knew we were newlyweds. Alas, all great things must come to an end… but it’s not really an end, is it?

Since the day of the wedding, we’ve heard so many heartfelt comments about how marriage an incredible decision and a wonderful journey, etcetera etcetera. If I try to keep us in Jamaica, or even safe inside our north Austin home, we aren’t really on that journey or experiencing anything (besides countless hours of television). We have to live our lives now as husband and wife out there.

Not knowing how to end this blog post, I just looked up and asked my handsome husband what his thoughts were about this upcoming week and our new “reality.” As I was not specific in my inquiry, the anticipated abstract response I had hoped for was, instead, a very practical look at the week ahead:  I begin my two daily commutes, I have two medical procedures this week, he has no idea what he is walking into at work tomorrow, I’m still trying to integrate myself into this house (i.e. I’m living out of bags and boxes with my most needed items still at my parents’ house), we have tons of presents to open, we don’t know where anything went after the wedding– and the list continues.

I just laugh at his response (in addition to the sudden pangs of stress I felt) because our differences are highlighted once more: I’m the feeler, and he’s the thinker. Yes, I think thoughts, and yes, Brian feels feelings– these are not exclusive roles– but together, we will live a much better “reality” than we did separately. So, I guess I’m glad I asked him (minus the stress pangs) because he reminded me that no matter what happens tomorrow, we have each other, and that’s a reality that I can definitely look forward to.

Everyone told us there would be a fight on the honeymoon. Well, everyone was almost right.

Since I was a kid I’ve been fascinated with the ocean. In 5th grade, I wanted to be an oceanographer. In middle school, I read books about sailing and pirates. And in college, I discovered Hemingway’s writings on his love for the sea. And when I got my scuba certification and went diving in the Caribbean Sea a few years ago my list of lifelong desires became quite a bit shorter.

There are still a few items on the list, and until a few hours ago, one of them was to learn how to sail a small sailing craft. The resort has the small two-person catamarans, and from the moment we got here I had my mind set on sailing one. Lindsey was not as set on it, as her mind is much more set on the spa– but she’s a good sport.

After literally two minutes of instructions in which I paid close attention and asked the pertinent questions, we set sail into the sparkling, blue ocean. Things were going so well, and so smoothly. It was a good solid fifteen minutes until the first bit of trouble set in.

“It’s fine, I know how to get us turned around.”

And there was the first crack in the edifice.

I turned the boat okay, and tried to head back to the beach, but there was not much wind this morning. The boat just drifted. I tried everything I had been instructed to do, and I did, my manhood was failing visibly.

“Umm… are we just floating?”

“No, there is only a little wind. We’re just not moving fast.”

I started going though the process again. Check the wind indicator. Turn the boat to 45 degrees into the wind. Check the tension on the main sail line. Hold the rudder steady. Pray for more wind.

“I can’t wait to have that jerk pork when we get back.”

Great. She was hungry. And we were at least a few hundreds yards from shore. I started thinking desperately. I’ve read about sailing these things and I knew I had the answer in the dusty stacks of my mental library.

Fifteen more minutes go by with even less progress. Lindsey is clearly uncomfortable, as this is not a luxury yacht. She moves from one side to the other. I warn her to watch out for the sail, she shoots me a look. She moves back and tries to find a little bit of shade.

“Did you put sunscreen on before?”

“No. Someone was in a hurry to get on the boat.”

“We had a place in line, it was our turn.” Pause. “You could have said something.”

She levels her eyes at me and gives me a look that could melt me like the Nazis in Raiders of the Lost Ark. Then… silence.

“I love you,” she said. But the frustration could not be more clear.

We set this funny little rule that on the honeymoon we could ask each other what they were thinking when they said those words, so I decided to use it then. I asked my wife what exactly she was thinking.

There it was. Of course it was hard to be in her shoes. I brought her along on something I was not competent at yet. It was right before lunch, and we’d had specific plans for it. I understand where she is coming from and truth be told, I am frustrated too.

But I did not say anything else. And neither did she.

After a few minutes of playing with the sail, a gust came up and caught the sail right, I turned the boat a bit and it started taking off. In that motion I remembered what I had been searching for– the right way to tack the boat into the wind. I’d had the angle all wrong for the wind we had.

Once I figured this out we started moving. Her spirits rose and so did mine. Lindsey dipped her feet into the water and begins to splash playfully. I choose not to mention the fact that this is actually adding drag to the boat. She is happy– so I am happy. At the end we were both quite content and had tacked the boat back and forth and brought it into the beach at a good speed. We were gone only about an hour, and in the end it was a good trip.

But it was so close to something else. Out there, 300 yards offshore we could have had a knock-down drag-out on the boat with no place to go. Had either of us pushed the conversation after Lindsey expressed her frustration, it would have gone very differently. But we both showed restraint. Fight avoided, honeymoon still blissfully happy.

A NOTE FROM THE WIFE: I learned in our pre-marital counseling how important it is to allow our men to be the men God created them to be. When I ask Brian to stop and ask directions, I am expressing to him that I am not confident in his decision making– that I don’t trust him.

So, out there on the high seas today, I asked God to help me love my husband. He responded by reminding me that I married a hunter, a forager, an adventurer, and yes– a sailor. Brian has to have the opportunity to be that man. And he is that man. I have to learn to trust that man. After so many years as a single woman, taking care of myself and making my own decisions, this shift in thinking and action will take some time. I’m sure that there there will many more posts to come on this topic.